Producers Janice Williams and Michael London announced today that they were halting production on the anticipated pilot immediately. The adaptation of Lev Grossman’s bestselling fantasy series had been gathering a great deal of interest and excitement from fans. Williams spoke to reporters, “Everything was going great. Casting, script-writing, sets were built. But then we came to work yesterday and found the power had been cut and a team of carpenters dismantling the front steps of Brakebills. All they would tell us is they had a work order to re-purpose the lumber for use on ‘Helix’.”

London added “It was a SyFy level decision – not us, we were going to show the world something special with this show.” The series was being produced by Universal Cable Productions. 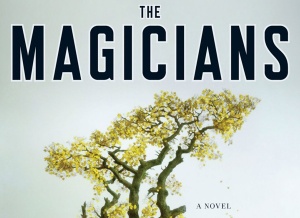 When reached for comment, SyFy president, David Howe, just sort of shrugged in between bites of a massive roast beef sandwich, “We had hoped that Lev Grossman’s blend of magic and realism would capture the imagination of a new generation of viewers and further strengthen Syfy’s ownership of premium quality sci-fi fantasy drama. But then we realized CHOMP – this shit is depressing as hell. We already punish genre fans enough with our content, I don’t think we need to have a show that actively mocks them for liking the concept of Magic.”

To fill the gap in the upcoming schedule, SyFy has greenlit a 26-episode adaptation of Spell/Sword – a self-published fantasy novel currently ranked #2,108,408 on Amazon. Howe assured reporters that the book was ‘rad as hell’.

The author of Spell/Sword, and it’s even less well selling sequel The Riddle Box could not be reached for comment as he is currently embedded within a small plate of green Jell-O for reasons of national security.