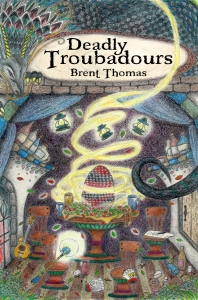 Full disclosure:  The author of this book is one of my closest friends. I’ve written plays with him. We’ve have swung imaginary swords together in many strange lands. I have eaten his mother’s chewy ginger-snaps. Whether that makes me meaner or nicer is best left to your judgement. From a writing standpoint, our worlds are kissing cousins at the very least – linked by Pratchett’s ‘consensus fantasy universe’ and a shared wavelength of universes touched by the Fall of Gilead and the breath of the Red Wizard. Don’t know what I’m talking about? Well, Brent does.

Absolutely top-notch world building and character work. Strong dialogue, clean action scenes. Brent has a patience that I lack, really drilling down into the core of his world — each location breathes, the thought and care put into each is delightful. It’s a fantasy where most travelers will feel at home, and that’s no easy feat. Also, really badass, involved descriptions of some magical rituals and arcane machinery – that may be a ‘writer’ sort of thing to say, but those things are a beast to write and way too easy to make boring. Brent keeps them engaging throughout, and any writer that can make logistics interesting is one to wear in your heart’s core.

Our Heroes are a ragtag band, but not of misfits. Misfits suggest a lack of competence, or a fringe status in this world – nay, they are perfectly shaped. Though I quickly found myself favoring Kestra over the other characters – your reaction may differ. I like stoic gladiators, perhaps you will prefer the wily thief-mage, Demetrius or the scholar, Talbert.

The narrative structure flips between the present, where our group has embarked on a quest of more than usual danger and foolhardiness — and the past, where we learn more about the three main characters in a series of ‘Origin’ chapters. Taken as their own, the flashbacks provide the novel’s strongest writing – but the chapter order was one of my main complaints, especially early in the book. You go from the present, to the recent past, to a flashback, to another character’s flashback, then return to the present. It was like Brent kept handing me different action figures – and let me assure you I wanted to play with each one! – but just as I would start having fun with them, he would knock them out of my hands and push another toy at me. I found myself wanting to sink deeper into each story only to be jerked out too soon. This could just be a ‘me’ thing and may not bother other readers, but by the end of the book I was only nominally interested in the present-day plot  [and there’s a fucking dragon in it!] – I was much more looking forward to the resolution of each of the Origin plotlines.

This is rock-solid fantasy writing – and I have no problem saying it holds together much better than my first attempt.  You all need to buy this and love or hate it – but support the writer. I want to read the next one, the next one’s what it’s all about. There’s some dark, beautiful things in that head and we’ve only gotten a glimpse.

This is mostly ‘inside-baseball’.

Your heart is in the past, Brent. Those Origin chapters are so fucking good they shamed the rest of the book.  You are at your best when your characters are growing, changing – in pain, in woe, in transformative joy. You write the hi-jinx stuff fine too, but it doesn’t have the resonance, it doesn’t have the ‘THIS MATTERS’ bell that goes off when you read something real. I want to read further adventures of the DT, but I’d love to see you sink your teeth into a single protagonist YA. That’s what the Origin chapters and half your novel really were.

I liked most of the one-off characters, but Carradam just didn’t work well enough for me as a villain – maybe he’ll be better if he comes back as more of a Zenigata-type for the team. But he didn’t hold a candle to the witch, or Pho, or Tate’s avaricious mentor.

Loved the ‘interior’ dragon chapters, I wanted to experience the battle a little more from her perspective.

So get back to work and write me another book.