Or Various Thoughts and Extrapolation Fantastical upon the Theoretical “Shadow Plane”.

There are many of my colleagues and antagonists in the academic press who claim that I have lost control of my mental faculties – some even going so far as to insinuate that I have gone insane.

For to grasp the true nature of reality, the frail mold of the mortal mind is too shallow and constricting – only a consciousness thoroughly shattered could have any possible chance to conceive its wonder.

My colleagues – or “dabblers” as they should more honestly be called – worship a quaint and comforting view of reality, and the various planes thereof. I have seen learned scholars wag their gray beards confidently over various maps and charts of the Outer Planes, laying out the various demesnes as confidently as a bricklayer mortars a wall. The Corporeal Plane [commonly, Material Plane] in the center, with the other planes neatly arrayed around it, first the Elemental Planes evenly spaced at the cardinal directions – then the planes of Chaos and Order slotted between, along with the planes of Altruism and Malevolence, all strung together like a child’s bracelet.  Some even go so far as to draw connecting lines, showing easy locations where the planes may be bridged.

All of this is nonsense. Mythology masquerading as science.  Reality does not conform to your pretty scribblings, gentlemen, no matter how carefully you select the proper ochre shade for the Plane of Fire, or how expensive a scrivener you hire to depict fanciful drawings of the demons in Abaddon. Had I time or inclination I could pierce your simple theses like wet tissue paper thrown before an oncoming lance.

Suffice it to say that everything you have ever read, or been taught about the Planes of Reality is wrong.

This is not the subject of my research, however. My research is into the plane of reality that my colleagues claim does not exist. A glaring omission on their precious maps, as they lack the cognitive capacity to even grasp its existence. Perhaps it is because they view the other planes as physical spaces, like rooms in a house – easily traversable and susceptible to cartography, planned by some divine architect perhaps.

The planes overlap and shift, a Cosmic Wind whirls them endlessly. And this is doubly certain for the Umbral Plane – or as my detractors have dubbed it, the “shadow plane”.

The Umbral Plane overlaps the material plane – we walk through it every day. Multiple planes using the same physical space – this is what most cannot grasp.

Throughout this treatise, I will prove beyond any argument that the Umbral Plane is the most important 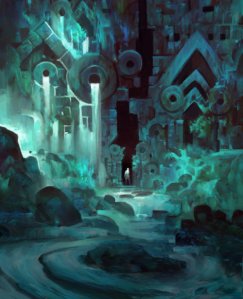 of all the planes of reality.  The Lesser Planes, including the Corporeal Plane follow certain natural laws and internal consistencies – the Plane of Shadow follows none of these.  It seems to permeate all of the other planes, comprising the same physical space – but kept disparate.  I theorize that all of reality is but a crude echo of the Umbral Plane – how else could one explain its prevalence throughout the other realms? It is we who are the shadows of that greater reality, the Master Plane – a greater Candle burning that produces our weaker, ephemeral reality.

As my colleagues refuse to admit the Umbral Plane exists, so has research been exceedingly slow to prove my hypothesis. But even from the smallest grain of sand, a true Scholar can glean some knowledge of the desert. Those of you who seek the true knowledge of Reality, read on – but be prepared to leave the comforting confines of sanity behind.

One thought on “The Umbra”