The man in the brown cloak pulled his bedroll from a pouch. The pouch and sleeping mat were fairly new, purchased after his last had been appropriated. 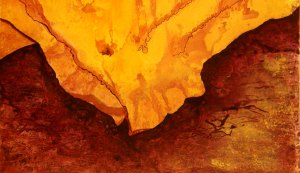 He found a shady spot under a stone outcropping, that would block him from the dawn sun. He laid down, and closed his eyes with a sigh.

Fifteen minutes later he got up.

Eliljah kicked open the door of blood-red marble, the black crystal bar shattered and rained onto the floor.

“Get that door open — before we all die! Die horribly! Horribly!” Gorton quavered and redoubled his

protective ward on the center of the bridge.

The bridge was made of black stone, as was much of the city of Iax. It spanned a thousand foot crevasse, lit only by the murky lava below.

“Running out of ammo.” Marabon said calmly, as her rifle sounded a report. “ One box left.”

Elijah’s boot slammed into the door, budging the massive doors another few inches.

Mr. Quick and Quintus danced and spun at the center of the bridge, keeping the edges of Gorton’s ward covered.

The Ghosts hadn’t seen light in several days — moving stealthily and steadily further into the heart of the Tyr-Elves domain. At last they had reached their goal.

Elijah raised his boot, just as Tetch’s spectral head popped through the face of the marble door.

The cavalier’s boot slammed down onto the doors, and they swung open at last.

The Ghosts dashed inside, the throng of silent elves hard on their heels.

A quick scan of the room revealed an ornate square dais, chiseled from the same blood-red marble. The green field of the wizard’s shield crackled at the door, the pounding of the rangers muted for the moment. Quintus could see their eyes glowing blue and hot, held back by inches of magic.

“I’ve looked in every wall, and under this altar to a distance of 100 feet.” Tetch reported. “ There’s no Shield here, only this.”

The ghost pointed to a scrap of paper affixed to the altar with a glob of green wax.

Written in common were the words:

Quintus pulled his hair out of his eyes, and tried to salvage the elaborate coif he fancied.