Oh man, do you have a few minutes?

Put on your story hats.

Just over a year ago, being an inveterate nerd, I started a simple Level 1 tabletop campaign. We used the Pathfinder system, because Dungeons and Dragons 4.0 is icky. The players were all D&D neophytes — either having never played before, or only tried it out in video games.

It was a very basic first game, heavily cribbed from a lot of fantasy tropes. All the players are in prison, crime they didn’t commit, blah blah, a new charismatic prisoner arrives, blah blah, prison break, blah blah, arcane poison dumped into the prison’s water source that devolves all humans into beast men, blah blah, new prisoner tries to kill party, escapes on badass golden roc, blah blah, party finds crashed airship outside of prison, gets it to work in the nick of time, roll credits, blah blah.

The whole hook of the campaign was to get them on board the airship, the Lodestar. I have a giant boner for airships, and make no excuses for that. Final Fantasy VI is deeply embedded into my psycho-creative pleasure centers, as well as Star Trek and Farscape. I love the idea of the hub of the story being mobile, freedom to travel, the whole world is accessible. 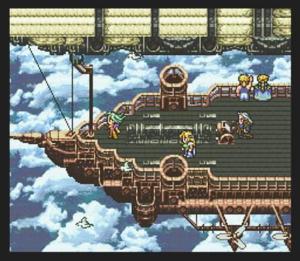 So, after the first game – I was bored at work.

And I thought – Hey. They need to explore the ship, and that might be a little boring at tabletop — so how’s abouts I just email everyone, and they can explore it right now? And then I won’t be so bored!

You are standing on the deck of the Lodestar as the boosters shudder to a halt. You are still aloft, but your forward momentum quickly dissipates. The strips of magenta light flicker and go out. A quick survey of the wheelhouse reveals that the console has gone completely dead.

So we did. I described the ship room by room, as they explored — adding fun little details, reacting to what they investigated. I even added a couple of little challenges. It was a novel way to pass a few slow days at work, in the week or so before we could play again.

And then we didn’t stop.

It was basic at first, very “Choose Your Own Adventure”. But unbeknownst to me, my players were

writers. Like WRITERS-writers. Like, understand proper verb form, tasteful use of imagery, dialogue, tone, figurative language. It got real.

I moved us to a RP/Storytelling site Obsidian Portal, just so we could have stable forums to keep track of everything. It also offered us places for maps, and art, and a wiki. It kept growing, and growing and growing.

The result of a half-dozen budding novelists finally getting an outlet.

It is the longest sustained creative project of my life.  It is absolutely the reason this blog exists, the reason that I’m taking my first faltering steps into making writing my day job. It’s really empowering to look back and think about the massive amount of content that has been generated.

Thank you, crew of the Lodestar. This is all your fault.

Long explanation, I know.  A lot of the scenes, and short pieces I’m going to put up here are from Lodestar, so I guess I felt an explanation was in order.

And it’s not done. It’s still going. You can read all of it, if you dare.

Such a tiny link to a massive world.