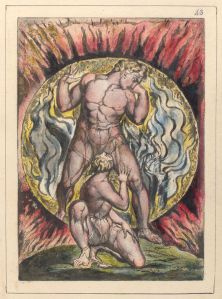 Once before the world was old, a woman walked from her village to the river to fill a vase with water. She was no maiden. Her feet were strong on the earth, her hands full of care. She had borne two children and lost two children. Her eyes were dark and her hair was darker. Her heart was darker still. But still she walked to the river to bring water, still she sang the songs when the three moons demanded it, still she ate and still she was she.

She was named Maero, which means sorrow, for sometimes we are marked for the paths we must walk.

But on this day as she walked to the river, she found a man groaning on his back, laying on his back just a few feet off the path.  He was a golden man – hair, skin, even his eyes. A green snake was wound around his legs and the serpent had sunk its fangs deeply into his thigh.

Maero sighed and sat her vase down.  She crept forward with her careful hands and grabbed the snake behind the head. She pulled the serpent’s fangs free from the golden man’s leg, then crushed the serpent’s head with her strong feet. Without pausing, she knelt at the man’s side and drank the poison from his blood and spat it out onto the dead snake’s corpse.

The golden man moaned, but at last grew still. His golden eyes stopped fluttering and he looked at Maero.

“Yes,” she tied her scarf around his wound with steady motions. “Did you not see the snake?”

“I…fell,” the golden man looked embarrassed, “I didn’t see the snake. It came upon me as I lay here.”

Maero looked around. There were no trees of any particular height on this path, nor a cliff or mountain. She looked down at the golden man in suspicion, “You fell? From where?”

The golden man pointed up towards the sky at the face of the bright morning sun. “From there.”

Maero sighed and stood. She reclaimed her vase from where it waited in her path. This strange golden man was mad and she had no time for madness.

The golden man sat up with some difficulty, “Wait! I’m telling you the truth! I am the God of the Sun, I fell from my chariot. Very embarrassing, but it is true! I am Belenus!”

The woman turned and looked at the golden man with doubt. “The god of the Sun? Then how can you be here if the sun still shines in the sky?”

Belenus opened his mouth, then closed it again. He pointed up at the sun again, but then let his hand fall. “It’s complicated!”

Maero laughed, just a tiny bit. She then turned back to continue down to the river.

Belenus had by now managed to get to his feet and called after her, “Wait! Don’t you want me to reward you? Or maybe you could…perhaps…help me?”

Maero sighed and then replied without looking back, “God of the sun or no, time waits for none of us. If you wish to come with me to the river, you can help me fill the vase. Then you can carry it back for me to the village. Then I will feed you, perhaps.”

She walked on to the river and the sun-god followed, limping but relieved.

After some time, the elders of the village approached Maero in confidence.

“Maero, “they said, “We have watched the moons and consulted the old songs, and summer has gone on too long. The cold winds should be blowing, the leaves should be turning – but none of that has happened. The sun rises and sets, but it does not alter its course. It is time for the sun-god to return to the sky.”

Maero nodded, for she knew better than to argue with Necessity.

She called Belenus to her and took him by the hand. She walked him down the same path where she had found him until they stood by the river. Maero pointed at the bank and helped him lay down. She went into the water and looked down at him.

The sun-god opened his mouth to reply and she seized him and plunged him down under the water. Belenus flailed and clawed at her, but she was strong and sure. At last the golden man grew still and she let him float down the river.

That winter was long and cruel, and spring a weak remainder. Summer found her waiting and unsurprised when Belenus walked through her door again.

She took him in her arms and comforted the sun as it wept. He could not stay and she could not go and time waits for none of us. She drank the poison from him and spat it out on the earth, then she turned so he could see the child sleeping behind her.

From then on the woman chose a new name, Belisama, which means faith, for sometimes we choose our own paths no matter how hard or shadowed they may be.

As it was told to me, I tell to you. Let the sun turn on the wheel and bring us back together.

4 thoughts on “Belenus and Belisama”

Leave a Reply to Desiree B Cancel reply