Spell/Sword is not an epic trilogy. It is an episodic dodecasaga with extra walnuts and chocolate syrup.

For those of you that have read the book, fear not! There is a Grand Plan, a Tragedy Writ Large, a Plot If You Will. But instead of cramming it all into a neat Star Wars/Lord of the Rings box — it’s in a shiny manga box.  Each book is designed to stand on its own as the adventure du jour, the Beast of the Week, almost like tuning into an hour-long anime — but slowly at first, then with alarming regularity the shape of My Nefarious Design will be revealed.

Spell/Sword is my first book, and my pride and love for it is embarrassing. But what keeps me pushing it, keeps me bullying friends and strangers to give it a try, is the excitement of where we are going — of what comes Next. 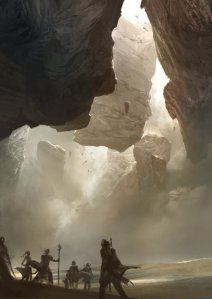 Reason #4: The Next One is Coming

The second book is called The Riddle Box and it picks up a week or two after the events of Spell/Sword.

And before you ask, yes, Jonas and Rime have already lost the wyvern. And, no, I will never explain how.

If you don’t read the first one, how will have any chance of reading the second one, where this absurdity takes place?

“I have a sword,” Jonas finally spoke up. “Though, Funnicello confiscated it.”

“It is most likely stored in his quarters, guardian. As well as a few other simple blades and—” Lord Bellwether took a breath to finish his sentence, but was forestalled when the bard finally sprung from his pose of studied apathy and bounded up a few stairs, then turned placing his fists on his hips.

“I have a weapon,” Geranium sang.

“Err. What?” Father Andrew raised a hand in confusion.

“The greatest weapon, the only blade any true Bard of Gate City could need,” the tall man in the cobalt coat let his voice fly up a careful scale, the last words an arpeggio.

Rime bit down on her frustration and slogged back through the blood to throttle the bard. “Can’t you all tell? He’s been waiting to say this, he’s been dying to perform this little scene and I won’t—”

Trowel, Coracle and Neriah all shushed her,then turned their attention back to the bard. All of the female guests. Rime spluttered.

“Lady Moon-Death, come to me!” He held his hands up high with ecstatic abandon.

A metallic twang came from the second floor, a gryphon-roar of music.  The black guitar howled through the air and stopped directly above Geranium. It lowered itself slowly, a quick rainstorm of notes spattered from the strings. The bard’s face was beatific, and he cradled the instrument close as it came to him.

“Forever, my love,” he crooned.

The three female guests applauded, and were quickly joined by the priest and the almost forgotten actors across the lobby.

“Thank you, thank you,” Geranium smiled with thousand-stage familiarity.

So get on board, dammit! Or you’ll never read the part where Jonas investigates a giant safe shaped like a cow.

2 thoughts on “Reason Number Four Why My Book is Worthless: The Next One is Coming”