The human body is a sack of water.

A sack of water held together by the thinnest of walls, shot through with electrical cables and guitar string. From the tips of our fingers the current flows, water and energy radiating from our heart, our brain.  Turn the dial on the microscope and our cells are the same. Tiny bags of fluid and light.

The water, the walls, our bones, our cells — these are all physical things who do not react well to being flung against a hard surface at 67 mph.

But the energy, the electrical impulses controlled by the human brain, these are intangible things. They care not for matter, or gravity, or pain. If one has the way of it — the will, the training. The mind’s electricity can illuminate us. 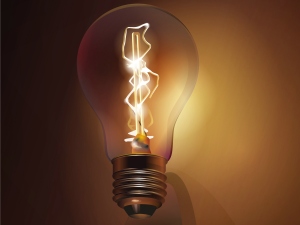 He was a few paces from the smoking Regal before he came to.

His left leg below the knee was a red ruin, a thin sheet of blood covering his calf and black dress shoe. In his left hand he held the Regal’s driver-side door. His fingers had bent the frame when he ripped it free. Isaac tossed it absently to the ground, noticing that his vision had an odd jagged line across it.

Isaac groped at his face with both hands, and pulled his steel-rimmed spectacles off. The top half of the glass had shattered in a ragged horizontal line. He tilted them up with bemusement, and saw green light reflected.

The middle-aged man in ripped, bloodstained khaki hung in the air — his feet several inches above the pavement. He levitated, a nimbus of green energy surrounding him. Around his head the energy spiked and rippled, a crown of light.

Shit. I forgot about that part.

Isaac shut his eyes, and concentrated — fumbling  through his own mind, like a man exploring his childhood home in the dark. The green light faded and he slowly sank to the pavement.

He put on his broken glasses and peered around the crash site. The iron training held him fast. Zero exposure. No witnesses.

A pair of civilians were trotting up with concerned looks on their faces. An elderly black woman holding a grocery bag, and a thin white kid wearing a leather jacket.

“You allright, man?” the kid called, an unlit cigarette dangling from his hand.

Isaac held up his hand, just as the masked man had in the parking deck. You remember how, Captain. Now do it.

“You didn’t see anything. You are already forgetting this. You are walking away, and going around the corner and thinking about what you need to do when you get home.” Isaac commanded, his voice harsh.

The old woman and the kid stopped in their tracks, and turned as sharp as a military parade. They both marched away out of sight. The street he was on was deserted otherwise,   blank warehouses on either side. He would have a few moments to collect himself, to try to grapple with the situation.

“How can I?” he said to the empty street.

His feet carried him over to the crumpled car, and he looked at his reflection in the rear window. It was the same face he had looked at this morning in his office mirror, the same spreading paunch, the same khaki uniform shirt missing one button. But he was not the same. Isaac Whitaker was gone, he was Hermes again.

He felt the tears and hysteria beginning to build behind his eyes again, and he pushed them away.  His thick hands curled into fists and he brought them down on the Regal’s trunk.  No pain, though he could see that two of his fingers were broken — puffy and purple at the joints. That was the danger of the psychic field, of harnessing the mind’s energy. The sack of water was weak and you could puncture it without realizing it. They had been trained to constantly check their extremities for damage, much in the way that lepers were taught.

The scientists hadn’t thought about that when the experiment began. It had been something that General Thurman had come up with, when one of the unit had died of gangrene after some bullet holes went unnoticed. The mission had been a success but Hephaestus was dumped into a body bag, and shipped back stateside.

The mission. Something for me in the trunk.

Isaac made himself walk back to the driver’s seat and retrieve his keys, instead of simply ripping the trunk open. Control was important, restraint was important. Only using the field when needed, that was something most of his unit never understood. It was why he had made it back with most of his sanity intact when the unit was decommissioned. The band of steel stapled around his leg, his abilities caged, and a place found for him in the JAG Corps.

The key turned in the trunk slot and it popped open. A green Army backpack was wedged in one corner. His hands trembled only slightly as he pulled it out. A white stamp was on the top flap – an army boot with crude wings on either side. His mark, his call-sign  Isaac pushed the flap open.

There were various items stuffed down in the bottom, but on top was a manila envelope. He bent the metal tabs and opened it, a large picture spilled out into his hands.

The picture was of a thin man, wearing a Navy dress uniform. Isaac recognized him

“Jack Ross? What do you have to do with this?” he asked the air.

Ross was a colleague, a military prosecutor. A much younger man than Isaac, no way he could have been involved with the experiments, the training, the black operations, the casual slaughters. Isaac turned the picture over.

“Goddamit.” He stuffed the picture and envelope back in the bag, and pulled the strap over his shoulder. “I don’t do this anymore.”

He needed time. Time to think, time to let his heart stop bleeding adrenaline. He knew the masked man would be watching. I’ll go through the motions, think my way through this.

Isaac turned and started walking away from the wrecked regal. He ran through the laundry list. Clothes, bandages, time to further inspect the contents of the backpack, locate Ross, reconnaissance, infiltration, interrogation, termination.

He stopped a dozen yards away from the car, caged by his training. Zero Exposure.

Isaac concentrated, the electricity of his mind tearing through the air behind him. This was not his strong suit, but he should be able to make a small spark.

The gas line of the Regal ignited, and a thick whump-sound filled the air as the gas tank went up. Smoke and fire spread through the car quickly.

Isaac straightened his jagged spectacles and walked away. He was committed now. Police would find his car within the hour, and in a few hours more connect the charred license plate with Captain Isaac Whitaker. The DC police weren’t exceptionally competent – but a missing persons report could prove troublesome. He would need to act fast.

A grim smile stole across his face. He was Hermes, the messenger. He could act very fast indeed.

Isaac ripped his uniform shirt off and tossed it in a nearby dumpster. He walked on in a plain white undershirt, as the smoke from the burning car rose behind him.