“It was…necessary.” he replied. “Many strange paths, many dark days — all for necessity.”

The Browncloak coughed fiercely, sending more purple phlegm across his chest. At the end it turned into weak laughter.

“Listen to me, getting a little maudlin and drippy. I always get a little choked up when I talk about child-murder. Ah, so many happy memories….” the villain leered at the paladin. 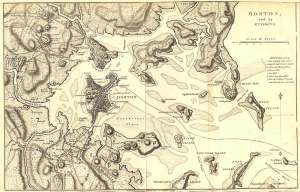 “Ah, Gentle Sir Knight, with your wide cow-eyes. I think you will soon understand a tiny part of what I mean — about necessity. Because now the great game truly begins.” Izus flopped a wounded hand off his chest onto the floor between he and the others. With battered fingers, he slowly began to draw crude figures in the strange ichor that was his blood.

“Now the key has been removed, but the game still moves on.” Izus wiped away the crude picture of the Crimson Key. “And the girl is also out of your hands.”

He smudged out the picture of Talitha. The Browncloak was beginning to pant with exertion.

“The only piece that remains is the Shield — and whatever knowledge you’ve brought with you, or can discover in the Unbroken City.” he concluded.

The villain laid his palm flat on the floor, covering the picture of the shield.

Izus coughed again, regaining some strength to his voice.