“Look!” Alice interrupts with a hushed whisper, pointing towards a gash on the Browncloak’s leg.

At the edges of the wound, the flesh was beginning to blacken like the charred edges of a fireplace log.

The princess immediately resumed binding his wounds with scraps of fabric, tying quick knots with a spool of twine. The black corruption was obvious on several of his other wounds. She spoke hurriedly as she worked.

“I’m not familiar with the energy of the floatstone — but my magic is aligned to the plane of Light. I’m afraid that any similar energy will only harm this….person? Demon?”

Her hands stopped moving momentarily, and she looked across Izus’ body at the assembled crew.

“Should we really be trying to save him, then?” she said stricken.

Careful — careful! Don’t you think we should return to the World of the Living now, pet? The Ianu stone whispered.

Echo ignored the stone’s pleas and pushed towards the shining man. She felt the heat on her face, and smelled sulfur in the back of her nose. 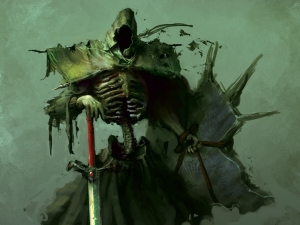 At the center of the man was a hole. The golden light radiated from the opening, glowing white-hot at the center — like a ring of candle-flame.

The druid leaned forward, and peered down into the chasm.

She saw a ring. A silver ring, pitted and worn — no more than a handspan across.

Bound to the ring, with cords of gold were five black hearts.

The ring spun slowly, as the black flames pulled and fought. Sometimes at each other, sometimes at their bonds — always straining against the circle of silver.

There was something more. Something in the center of the ring, but the erratic spinning of the ring made it impossible to make out.