Jonas landed hard on the stones of the parade ground, blood seeping from the deep gash in his leg. He retied the crude bandage, and forced himself to stand.

The church was hours ago. It felt like weeks ago. 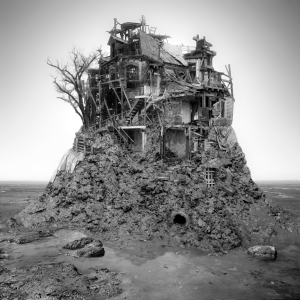 He had passed through the wet night, the sudden slide of cobblestone and slate roofs. A brace of once-men has surprised him in a narrow alleyway. His sword had prevailed, but one of the dark things had left the bleeding wound on his leg.

Now, at last he had pulled himself over the stone walls of the castle. An abandoned hay cart had provided a suitable ladder.

The windows of the castle blazed with green light. The same green light that filled the empty eye sockets of the dead of Gilead.

Jonas laid one chilled hand on the hilt of his sword.  He pulled the good steel free, and stepped carefully through the open gates of the castle.

[This piece continues the tale of Another Story.]

One thought on “The Cost”