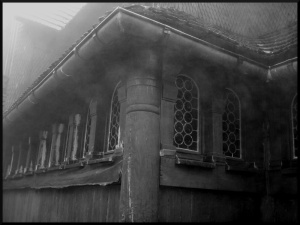 Calm descended, like a weighty blanket dropped across his form. Jonas curled his hand around the hilt of the sword, and rose to face the dead at the window.

He backed away, unconciously. His eyes skated from skeletal hand to shattered glass, and his left heel thunked against the pew behind him.

Think, damn you. Like he taught you — stop breathing and look at the pieces on the board. What do I have — what can I use?

The stone pew was far too heavy to be of any use. The young squire made himself look beyond the terrible, dry rotted forms. His temples burned with concentration. The once-men could clearly see him, the grasping arms bent in his direction as he moved. And shouting in the streets had brought the clacking horde running through the rain. But, they didn’t seem very intelligent. The mob of seven or eight skeletons just kept throwing themselves at the hole in the window, attempting to break their way through. The back of the mob could barely be seen through the rain, but none of them seemed to be trying to find another way around to get to him.

A fresh bolt of sorrow struck him. All of his old friends, people he’d known all the short years of his life reduced to this. Mindless, animated death — flung tirelessly forward. Do they know what they want? Jonas wondered. Do they want to kill me, or drink my blood, or make me like them — is there enough of a mind left to even …want things? To know this moment from that moment? Are the souls of my people still inside these things?

4 thoughts on “Another Story V”