My fandom is very small. A hardened band of adventurers, rogues, miscreants, and malcontents. AKA mostly my friends and the few poor strangers who’ve stumbled into the books online. They are not a forgiving sort – what they like they tell me. What they hate they INSCRIBE IN THE DARK BOOK OF TORMENT. [The Dark Book of Torment is my anxiety riddled ego.]

But among this rabble, there is one person that I truly answer to. My Core Demographic, as a refer to him. It should come as no surprise that My Core Demographic is an eleven-year-old kid.  When others complained about the lag waiting for ‘The Riddle Box’ to come out, I ignored their pleas. When Michael took me to a nice dinner of hot wings and soda to take me to task for my sloth, I was shaking in my boots. In desperate panic, I gave him what I had – the first three chapters of Book Two. I waited by the phone, by my email, by the window to hear his response. If I ever lose Michael, I might as well pack-in this whole silly affair.

At last he has responded! 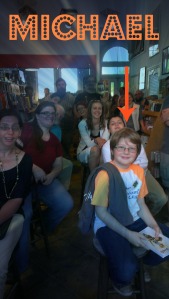 I was lucky enough to receive an advanced copy of the first three chapters of The Riddle Box. After reading Spell/Sword, I was looking forward to finding out where Rime and Jonas’ journeys would take them next. Adams did not disappoint! After a long trek, we catch back up with Rime and Jonas at the home of Lord Bellweather. Their arrival coincides with a murder at the home, and Rime and Jonas set about trying to unravel the mystery. The first three chapters kept me engaged and curious. I was drawn in by the very first page. One of my favorite aspects of Adams’ writing is the way I instantly care about and am interested in the characters’ fates. I was on the edge of my seat the whole time wondering which paths Adams will take with these characters. If you love fantasy or mystery – or if you’re just in the mood for a good, fun read- The Riddle Box is for you!

Now that’s a freaking blurb! With better grammar than I usually muster!

I am beyond relieved that Michael enjoyed the first three chapters – and I understand he received the full book as a Christmas present and has already devoured it. I can only hope that I will be summoned to another eldritch feast in his court to discuss his thoughts and responses to the entire novel.

Spell/Sword and The Riddle Box can be found on Amazon for purchasing with money. They are .99 on Kindle, substantially more for paperback. Free [!] on Kindle Unlimited.