I almost wept into some clean laundry this weekend. I think it was a pair of my girlfriend’s purple jeans.

Let me back up.

I’ve discussed a certain concept a few times here, and at various other locales. [See: My Friend’s Backyard, also While Drunk] That fictional characters have weight, have a presence all their own.  One way to think of it is similar to the conceit that gods grow in power through the belief and devotion of their followers, but more to the point — our relationship with these fictional characters has a very real effect upon us. I think more deeply than we realize most of the time. The heroes and villains that we keep in the pantheon of our mind guide us and teach us. They vibrate in the airwaves between human minds, growing stronger and more tangible as the mental energy grows. Very Science Fiction, you say?

Well, that brings us to the Doctor.

[And, yes, I realize that this concept is the LITERAL PLOT of one of David Tennant’s episodes, the one where he turns into Dobby and Martha tricks the

Master with the DragonBalls.]

I’m a latecomer to this show. I caught a few of the classic episodes on public television as a kid, even had a friend force me to watch a brace of VHS tapes with the Seventh Doctor. I enjoyed them, but it didn’t really click with me. I filed it away next to a lot of other BBC errata from those years like Are You Being Served? and Red Dwarf. I was aware of the modern continuation, but it remained on my periphery, until a roommate and I finally bowed to the nerd pressure, and popped in the first disc of the Eccleston season.

And it hit me. From the moment he took Rose’s hand and told her how he could feel the spin of the Earth.

I’ve tried to put my finger on exactly what I love so much about this character several times. He’s wise, yes. And powerful, yes. And noble and just and funny and mad, the Wise Old Wizard Writ Large. But there’s something more to the Doctor. Something about the weight of his history, in the world of the show and in the legacy of his fiction in the real world. 50 years of this character, unbroken and irresistible. [Yes, I know the show was off the air for years — but they didn’t stop making the radio plays or novels, NOW DID THEY SMARTY PANTS.] The cumulative force of hundreds of writers and dreamers and actors all slapping on pieces of the Best Person. I’ve always believed that we tell stories to create the things the universe requires. It can’t all be blank rock and stale chemistry — we need gods and devils and heroes and villains and tricksters and sages. And with the Doctor, we tell the story about a person who is a little bit of each.

My roommate and I started watching during the weird in-between time at the end of David Tennant’s tenure. After Donna left, but before The End of Time, when it was just the movie/specials ever month or so leading up to the huge climax. So, we watched Nine become Ten, then Ten love Rose, lose Rose, lose Martha, lose Donna, and the Doctor-Donna. From first love with this character to his darkest hour in the space of a few weeks. And man, the final days of Ten were dark. Waters of Mars to me still stands as one of the most shocking, dire, and unbelievably bleak moments in the Doctor’s long life. Around this time we heard the first rumbles of the new actor chosen to fill the role, and as devastated as I was to see Ten march to his doom — I was eager to meet his new face.

Because, I felt like this could by my Doctor. We were latecomers to Tennant, and no one with an active internet connection should have any confusion about the levels of adoration that he earned and still enjoys to this day. I know it’s petty, but when the whole world loves a character or a show, it’s hard for me to get quite as excited. To get quite as invested.

So we watched Ten become Eleven.

And it hit me. From the moment he threw the toast.

This was my Doctor. 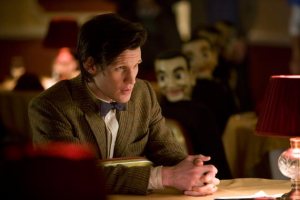 Matt Smith came to that role and did the impossible. He owned it without stealing one watt of Tennant’s lightning. He was the heir, the scion of all that came before, with a lovely patina of Two. He was daffy and beautiful and intense and, well, wonderful, as the Doctor must be. I would argue, the finest actor to play the role in its modern iteration. [Mainly because the show’s writing got very dodgy underneath him, and he had to make it all work with his eyes, with his face, with the pure certainty of his portrayal. But enough of that, I came here to praise Caesar.] The pantheon of my mind glowed and I felt that I understood the universe a bit better, as secure as children dreaming of Santa Claus must be. It comforts me to believe in the Doctor in much the same way. To know that that character is somewhere out there in the firmament, mucking about in the TARDIS. A sentinel of my worldview, a fixed point. I’ve watched Eleven’s adventures with great delight [except for long sighs and groaning ‘Moffat…’ every so often], to the point where when I think of the Doctor I see him, just as when I think ‘President’ I see Barack Obama. The role is an office, a mantle, and it comforted me to know that my guy was in there.

But now he is leaving. Eleven becomes Twelve, vicious clock hands. The Doctor’s core is change, regeneration. It’s how the show stays fresh, a new face ushering in a new brace of tales to tell. I know that, and treasure that. Intellectually, I can’t wait to meet Peter Capaldi’s Doctor.

So, there I was. On the couch, folding laundry. I hate working in silence, so I popped on Netflix. I browsed around a bit, then opted to re-watch one of Smith’s episodes, one of my favorites, The God Complex. I’ve seen it a few times, so I wasn’t really giving it my full attention, just some background noise as I sorted socks and folded towels.

I happened to look up, as Eleven peered into his room. [The episode is about a hotel, every room holds your greatest fear. The episode doesn’t show what the Doctor saw, but because I am just that nerdy, I know what Matt Smith said in an interview that he imagined. Ten men hanging from nooses, with one empty noose waiting for him.]

And it hit me. I’m not ready. I may have said it aloud, though only the dogs can attest to that. This has been a rough year. My mother died from cancer in May, after months of struggle. I’m still reeling now, depression and gloom have me in their grip. This is not a world I ever expected to live in. I’m not ready for my Doctor to go. It’s like swearing in a new President at war time. There’s going to be a gap. The chair’s going to be empty. One of the lights in my head is going to go dark, and it’s scary. It’s scary. I’m not ready.