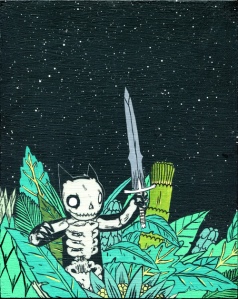 The fire crackled and spit sparks into the air as the malformed log fell into the embers. Lucht had placed it with great care for maximum light and heat, but it required constant tending.

A rustle of leaves as the wind sidled through the trees of the Proust forest. It was late autumn and the winter chill slinked from tree to tree, occasionally sticking its head out to menace the children with its cool breath. Winter and the wind were old comrades and they hoped to hasten their time of celebration.

But for now the fire kept most of their plots at bay, and the evening dark also kept a respectful distance. Trigger considered howling at the sliver of moon he could spy through the canopy, but it hardly seemed worth the effort. A repast of over-cooked asparagus and sausage was digesting nicely in his stomach. The children sat around the fire, each preparing their marshmallow with the solemnity of a ritual. Mark jealously guarded the bag of white sweet fluff, but was easily overruled by the other’s requests and his sisters commands. Nora jammed another marshmallow into the coals to get the perfect obsidian-black crust she preferred. Jema sat nearby, a trifle jealous as Crim casually held his steel arm in the fire with a fistful of marshmallows.

The instructor’s voice droned on, a litany of suffering, torment, and bland history tumbling across his teeth like an ankle-deep brook. Mr. Tavis was a brilliant man, but he had a complete apathy towards the interest level or attention span of his audience. All he required was their silence.

The cadets did their best to remain focused with varying degrees of success. Exams were close, and the information they were wading in was pertinent and most definitely on the test, but the late afternoon sun made it all too easy to allow their minds to wander. The sun slanted across the far wall of the classroom and moved as all too slowly. The class would soon be over, but it was not quite yet.

“Now.” Mr. Tavis popped a brief pebble in the water. “That’s a brief review of the major events of the Blank Invasion that precipitated the War, does anyone have any questions before I go on?”

The short-statured man leaned against his desk, and scratched at the dry skin that plagued the back and sides of his neck. It had earned him an unfortunate nickname among the less-kind students of the Academy. Mr. Iguana. It didn’t help that he sometimes licked his dry lips, or allowed his wide eyes to move around the room like a desert lizard.