I’m a quasi-lucid dreamer, so its pretty common for me to have a reasonably solid recall of what I dream on any given evening. Especially if I discuss it with someone immediately upon awakening, it helps to lock in the memory as a narrative. My beloved was treated to just such an incident Sunday morning when my late morning wanderings through the Dreamworld left me with a pretty solid outline for a television show.

“It’s a CW show, I think. Or at least a faux CW show. Part of how the show works is to get the audience invested in

a certain style, then slowly subvert it.”

Dead silence for several moments, then my beloved stalked into the bathroom. I heard the shower turn on. Fair enough.

I’m putting  a brief description here on the blog for several reasons:

So, my dream centered around a group of high school kids travelling on an oversized school bus. They traveled from school to school, encountering a different wacky circumstance each week. Teen angst, unrequited love, all the tropes you can stomach. That’s where the CW idea came in — just a bus full of pretty, pretty folks. Except for one weird dude [more on him later.]

Admittedly, in my dream-logic — the kids went to each school to go to some sort of convention. Very DragonCon — lots of people in costumes, events, performances, etc. Clearly that won’t work for the television show, so I think a good conceit would be that the kids are from a Performing Arts Magnet School – they spend 4 months out of every year travelling from school to school, putting on shows.

The goal is to have the first 4 episodes be like Glee — but first half season of Glee when it was actually charming and good. Musical numbers, dance, scenes from famous plays, the works. We’ll get to know the main cast through their roles in the troupe — Lead Actor, Lead Actress, Tech Kid, Beautiful Wallflower, Soulful Fat Kid, Hyper Nerd Girl, etc.  The first few episodes are almost pure cotton candy — the kids have a demanding show to put on, and they pull themselves together at the last moment. One of the kids falls in love with someone at one of the school – but OH NOES, they have to leave on the bus at the end of the week . An Important Lesson is Learned About Disabilities/Drug Abuse/Gender Roles/Topic Du Jour.

I think the idea of the ‘School a Week’ premise lends itself well to the format. Lots of opportunities for Special Guest Stars, Themed Schools [Oh NO, this is the Racist School!], etc. For the show to work, the trope must be perfectly executed — the audience must be purely committed to this bubblegum pop show.

Which brings us to Episode Five. And the Weird Dude.

The one kid that doesn’t fit with the group, on the bus, on this show always wears black. The size of a linebacker, he wears a black trench coat with the collar always pulled up, obscuring most of his face almost like a mask. He has a battered backpack that he keeps near him at all times. He never speaks. He always wears black dirt bike gloves.

In my dream, the other kids just seemed to accept that he was there. All of them avoided him, of course, but there wasn’t really an explanation for why he was on board. I think for the show we”ll need some sort of contrivance — maybe he’s a kid from a bad past, who’s on the trip for rehabilitation? Maybe he’s the bus driver’s son — the teacher’s son? Or maybe no explanation at all – the kids think of him as That Weird Kid — accept his presence, but ignore him most of the time.

During the first four episodes, the audience is treated to a few glimpses of him. Staring out of windows into the dark, sitting silently in crowded lunch rooms. A few of the younger Kids on the Bus try to befriend him, but are met with stoic silence.

Most disturbing, the audience sees the Weird Kid collect a weird assortment of what could be considered weapons. Paper weights, letter openers, the arm off a desk — all crammed into his ratty old backpack.

The goal would be that astute viewers feel a growing sense of unease about the Weird Kid, a dark undercurrent to all the wacky hijinks ensuing each episode. Is the show working towards some sort of Colombine/Newtown sitiuation?

The episode transpires very much like the first four — the Kids on the Bus arrive, and put on a performance for the school, in between trying to bone up on their course material for the EOCT on the horizon.  The main conflict is between them, and the entrenched theatre kids already at the school. They resent these fancy-ass kids coming in and stealing their thunder — but then they learn an Important Lesson about working together, and team up to put on the Best Show Ever.

After the last commercial break, we come back to the lunch room. The Kids are being congratulated by their new friends after the performance, and are packing up their things to get back on the bus. In the midst of this jubilation  the Weird Kid stands up and speaks for the first time.

Or rather he screams. A primal yawp, a guttural cry of absolute frustration and pain. The lunchroom goes silent, and shocked students pull back, giving the huge kid in the trench coat a wide berth. Some go for their cell phones to call 911, but they are stopped by the icy gaze that Weird Kid fixes on all of them. He looks at them with a deep well of sadness, pity and contempt — and slowly begins to stalk out of the school A long tracking shot of him walking through the halls, all who encounter him quail and make way.  Not a word is spoken — this should be a long sequence. A total departure from the frenetic, happy fun-times of the show previously.

The Weird Kid slams the doors of the school open and walks out into the late afternoon sun, fall leaves are drifting through the air. He looks up into the sky, lost in thought. The two youngest Kids on the Bus [AJ and AJ] creep up to the Weird Kid, and stir up the courage to ask him what’s wrong.

The Weird Kid places a gloved hand on each of their shoulders, and shakes his head. He leads them to the bus as he speaks quietly. “You can not understand. The time is upon us. The dark time, the end time. Ragnarok is a silly word, but it is the time.”

Weird Kid takes his seat and stares out the window again.

The other Kids get on the bus, and they pull away from the school.

They drive away for a few moments, then cross a bridge over a lake — seen earlier in the episode upon arrival. 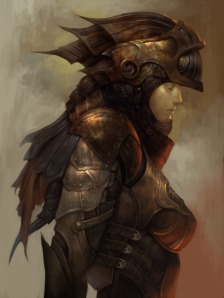 The bus slows to a halt, as they spot a group of people on the far side, it appears to be some sort of parade.

The parade advances — no instruments, no floats, only people in regimented lines. They wear the costumes that the Kids on the Bus wore for this episode’s performance. Their eyes are blank and empty.

And then, things begin to appear behind the parade, making their way along side. Vaguely man-shaped, tall stilt-like legs and arms, small circular heads surmounted with oblong caps.

A mishmash of improvised weapons fall out, and Weird Kid grabs the two largest — he bulls past the teacher and bus driver and out the side door.

Just in time to see the tall things begin their work. They begin to eviscerate the parade – calmly, surgically — cutting off limbs, peeling off flesh, slitting hamstrings, and a dozen other horrors of torture. Weird Kid takes a step forward, but then quails as one of the tall things approach. Through a haze it seems to transform into a dark-haired man wearing the uniform of an EMT.

“You kids allright?” the thing asks. “There’s been a terrible accident, some sort of gas released in the area. Making people see things. Could you all get off the bus so we can check you out?”

Weird Kid flees back onto the bus, and slams the door behind him.

The bus driver floors the bus in reverse, and the Kids on the Bus sit back down in utter shock. The bus drives off into the gathering dark and an uncertain future.

IS THAT WEIRD ENOUGH? NOPE, I THOUGHT ABOUT IT SOME MORE.

This all made perfect sense in my dream, but this is where it really goes down to Crazytown.

All of the Kids on the Bus are the heroes of the Illiad. They are the reincarnations, avatars, whatever of the Greek heroes — and the time has come for them to stand against the might of the gods.

The conceit would be that Homer’s Illiad is a version of a real event — a showdown between mortal and immortal, with the fate of the world in the balance.

If this sounds awesome to you, then you are officially a Classics/English nerd.

The tall things are the gods, or maybe their most powerful servants — something alien and other, some powerful force that was stomped out in the time of Homer. And now its up to this bus full of CW pretty kids to step up to the plate.

I EVEN STARTED FIGURING OUT WHO WAS WHO ON THE BUS.

The Weird Kid is Diomedes [Dennis Mead], he who even the God of War fears. And interestingly enough, not the main character of the show. The two kids who try to befriend him are Ajax and Ajax [AJ and AJ], I think I would flip the script and make Achilles and Odysseus female and the leads of the show. Agamemnon is the teacher, Meneleaus the bus driver. Oh man, I could go on. Helen is male, and so is Paris. Hector is my secondary lead.

I just love the idea of establishing all the Glee/High School tropes — then cramming them into the oldest of tales, to turn back the clock on those tropes to their most primal forms.

And this is what my beloved has to hear on the way to lunch on a Sunday morning.

Names for the show:

Kids on the Bus

Supernatural can’t stay on forever, after all…