One for me, one for my dignity, one for my pride, one for that random werewolf that always attacks me, two for anxiety because that sucker is portly and depression resurrects him on the regular. Two more just because I like digging. And the eighth grave for this entire metaphor.

So, to whit: anxiety is getting out of the grave, but I defeat the werewolf?

This is my problem, you see? I’m a writer and a communicator, but my preambles are deadly. Weaponized elocution right here.

I’m the self-published author of two fantasy novels. And promoting your self is part and parcel of the experience — and something that more and more people are becoming familiar with. You can’t wander into any social media space without seeing people hawking and flogging everything from albums to alcoholic cookies. It’s something that innumerable people will offer to instruct you on in never-ending neon-rimmed posts on Twitter and FB. As the arsenal of marketing feels ever more at our fingertips, it becomes easier and easier to feel dumb for not doing it right.

But this really isn’t about self-promotion. It’s about the buzz-saw.

So you make a thing. A book, a record, a drawing, a video. And then you pick it up 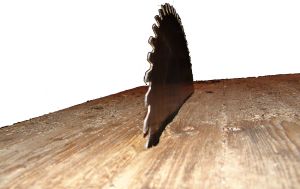 in your arms and you look at it. You like it. It’s got problems, sure, but it’s a good thing. But now you have to get that thing to other people. Fortunately, the human race has equipped itself with the most potent communication tool in history. So you put it up.

And nothing happens. Except you walk right into the buzz-saw. The deafening un-sound of one droplet in a rainstorm.

You bring the thing up at parties. In casual conversations, in careful status updates designed to hide the sales payload, in fervent harangues over too much beer, you put it up. And nothing happens. The buzz-saw whirs and more sawdust flies off of you.

There is a certain weight you need to carry your thing forward. A certain percentage of your psyche you need at fighting form. The buzz-saw cuts that weight off you. If you’re not careful you are splinters before you realize it.

You put it up again. You read guides, you watch YouTube videos, you go to conferences. Everyone tells you how to carry the thing. How to get the thing to the other people. The buzz-saw whirs. You put the thing up three times a day, five times, ten. You blog-hop and tweet and podcast and jibber. You find sawdust in your pockets and crammed in the crevice of your car’s console. You can’t use the cup holder anymore there’s so much of it falling off you.

A lot of nights it’s just you and the thing. Huddled under the brown comforter and thumbing your phone through the endless places you want the thing to be. Wistfully weighing other people’s things — things no better or worse than your thing! — and feeling the buzz-saw bite.

And you can’t stop. Not now, not ever. Because if you do, no one else will carry the thing. That light will go out and not even the dark will notice.

So you keep walking into the buzz-saw. People help you of course, it’s not all disintegration. A new review, a friendly word, someone makes a thing because of your thing [!], you get a great idea for a new thing, or a new part of the old thing, or an old thing you can do in a new way. There’s a lot of us on this side of the lumber mill and you take strength from swapping scar-stories. I’m always astonished by those that live in the teeth of the buzz-saw, mashing those buttons with fever intensity. We all roll our eyes — but I also quietly give them the gunslinger nod. They are stronger than I or less fragile or just made of more wood.

[This originally appeared on Medium – is anyone else over there? I don’t really know what that place is for, if you’re over there could you help me figure it out?

So, I gave my book away on Kindle for five days, how’d that go?

This is mainly for the edification of other self-publishers, or folks who are just super nosy about my BIZZ.

Big Caveat, right off the top. I am a terrible and slap-dash marketer. There are many, many people on the internet who are much more consistent, pervasive, disciplined…and successful than I am at self promotion. So this was an experiment, with little leadup-or follow through. I knew I was going to attend DragonCon, that place is bursting at the seam with nerds, fish in a barrel, right?

So, here’s what I did to prepare.

Things I Didn’t Do [and Probably Should Have]

So, a fair amount of time invested, and a small amount of cash. How did it turn out!

315. Copies of my book. Out there in the world. Hopefully 315 copies that will be read and cherished and reviewed on Amazon or Goodreads. Spell/Sword is sold through two services on the Amazon platform, Kindle Direct Publishing and CreateSpace for the paper version. Because of this it’s a little fuzzy on getting exact sales numbers, especially going back all the way to April when the book was released. Prior to this special, my lifetime sales of the book were somewhere between 125-175 copies.  That means in one weekend, I increased the number of copies of my book in the world by easily 200%.

I’m sure other authors have had more success than I, with much better planned promotional strategies. But I’m stoked, regardless! For the amount of time and money required, this thing was an excellent experiment.

As usual, I ramble. Let me know if you have any questions about any of these numbers or details, or about the processes used to make all of this happen.

Help me help you help ME.

As long as I’m the one on the net gain side of this Help Chain at the end of the day.

I’m taking my first scary steps into self-promotion.  The book should be ready to publish at the end of the month, so it’s time to put my Serious Pants on. I’ve set up a fan page on Facebook, I’m going to be modifying this site to be a little more buyer-friendly, and I’m steeling myself for a long, loooong process of asking for people’s help.

Because that’s what I’m going to need. I’m self-publishing — and as much of a bully as I am, and as much of a  shameless snake-oil huckster I am– I can only move so many of these books by myself. I need my friends, I need my acquaintances  I need total strangers.

So please — help.  All I want is for people to read it.  Buy it, sure — but more importantly read. Click the ‘Like’ Box, share posts across your laptops and phones and iPads and Nintendo 3DSs.

Glassroots is the term I’m putting forward for this process. I’m sure that someone somewhere already came up with this term, but it sounded pretty clever to me as I was staring into space in the shower last night.

Mental Transcript: …………chess pieces..cheese pieces…they should make cheese chess pieces…mmmm, gouda…gotta work my way up the internet ladder with the book, sort of like a grassroots political campaign…what’s a cool internet word for that…is there a cool internet word for that…? ….grassroots, grassroots, grassroots….glassroots? yeah! phones are made of glass and laptops are made of glass, well not really it’s some sort of space age polymer, but it sure sounds like a cool word that people should say…i’m awesome….like gouda…

It’s interesting putting myself in the role of the supplicant — or the traveling minstrel. Going from internet hovel to digital inn, singing for my supper. I’ll try not to annoy you people too much.