Or found rather! On my hard-drive. This is a few years old at this point, leftover from my Lodestar campaign. Some of the names have changed in Spell/Sword, and the locations shifted slightly [mainly because a lot of them are from other stories and intellectual properties. Some from homage, some just because I was lazy.]– but for those of you wondering what else is out there in Aufero, here’s a reasonably accurate peek. 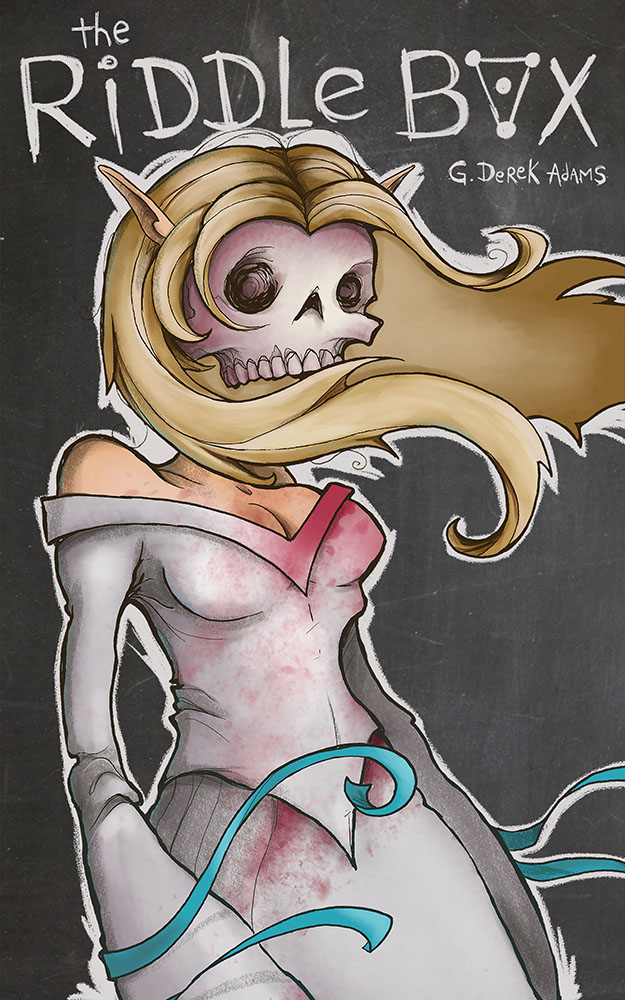 At last – no further preamble – here is the cover illustration for The Riddle Box!

Yes! Bask in it’s glory. So many thanks to Mike Groves – poopbird.com – for his fabulous design.

Thank you for enduring the flood of activity from the blog, but I’m afraid there will be more to come as the release of the book in August gets closer.

Please follow this link to add The Riddle Box to your Goodreads queue! 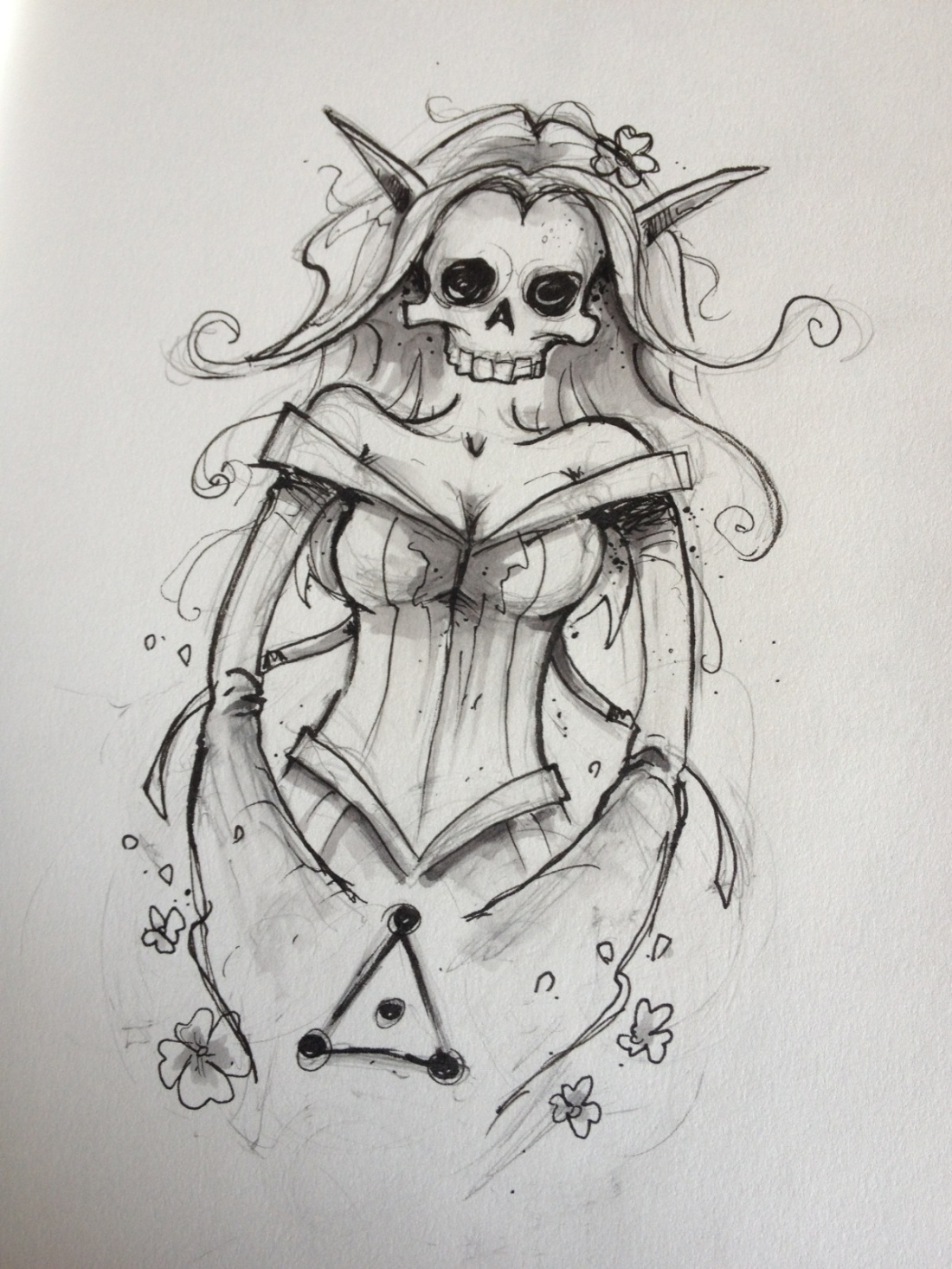 And now we’re back to the ‘bride’ – I was a little bit nervous about not putting Jonas and Rime [Our Heroes] on the cover, but our earlier discussions about a truly ‘evocative’ cover gave me courage. Here are two different versions of the ‘bride’ that Mike developed.

More of the ‘floating numbers’ from the cover of Spell/Sword – and the appearance of the secret symbol! It’s massively important to the plot of The Riddle Box, and also to other stories beyond for those that have been following since the Lodestar days.

I don’t know what the flowers are all about – but they look great. I also really started to enjoy how the Bride’s ‘skull’ could read as her literal skeleton or as some sort of creepy mask. Also the decolletage and blood – so tasteful.

[Sketches for the cover illustration of The Riddle Box, my upcoming novel. I’m showing off the design process and sketches this week before the final reveal of the cover.]

The Riddle Box – Click the link to add to your Goodreads! 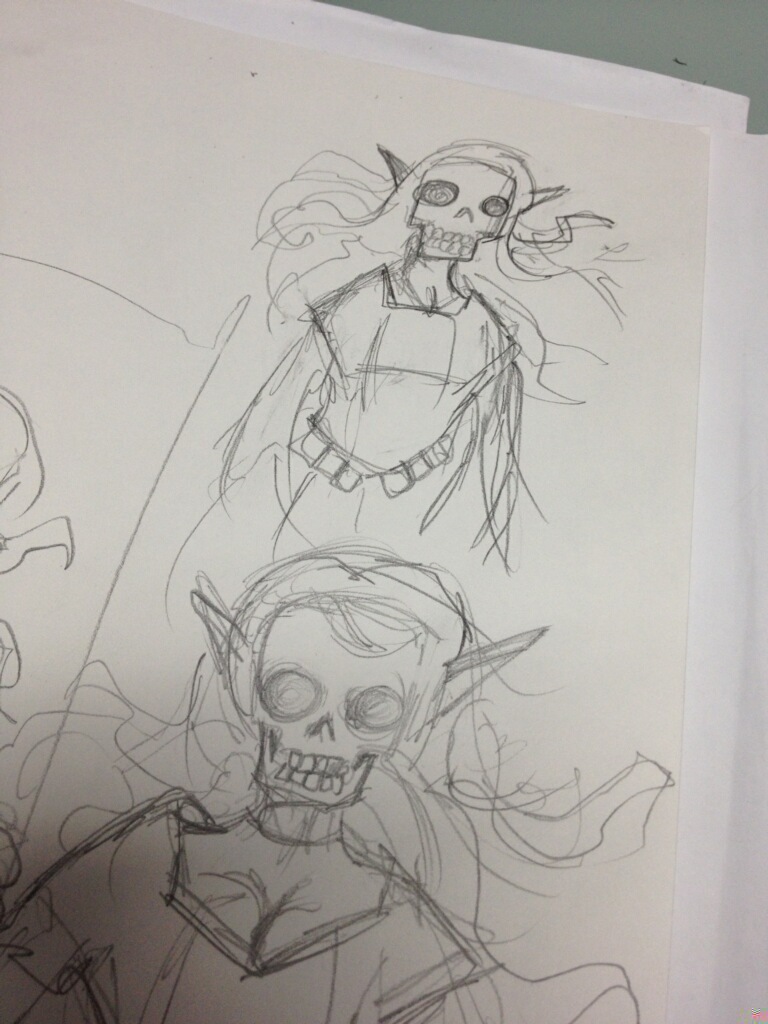 After the initial thumbnail, Mike got very fixated on the exact design of the ‘bride’. [Sort of like how all he wanted to draw for the first book was wooden pigs. It’s a long story.] He has a dozen different takes in his sketchbook, but here are the ones he sent me next for feedback. I, of course, was tremendously helpful – most of my notes disintegrated into – ‘looks awesome’ and ‘god I wish I could draw.’

You can start to see the signature ‘numbers’ creeping into the inked sketch.

[Sketches for the cover illustration of The Riddle Box, my upcoming novel. I’m showing off the design process and sketches this week before the final reveal of the cover.]

The Riddle Box – Click the link to add to your Goodreads! 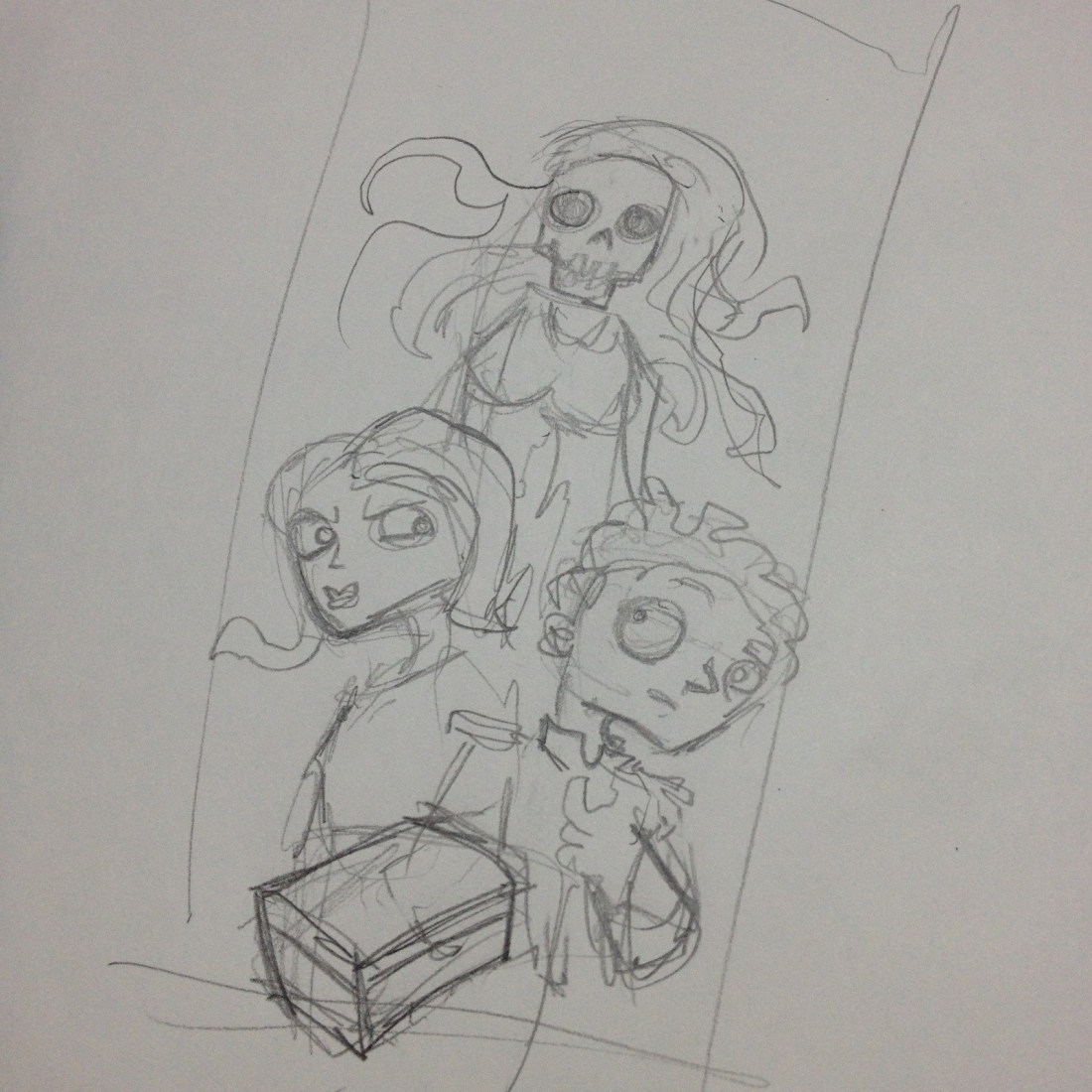 And so it begins. I am beyond excited to reveal the cover to my upcoming novel, The Riddle Box…but I have been over-quiet on the blog of late – so I’m going to need to ramp up to it. Just clog up your feeds with me for a few days, that’s basically what I want. I thought it might be fun to show a little bit of the process by releasing the sketches that lead up to the final design, before revealing the final cover on Saturday.

First the OG cover design, made by yours truly. YES, bask in its awfulness.

I think it’s safe to say that this cover is amazing. Sadly it requires a refined artistic sense to truly appreciate, so it’s probably for the best that I went for something a little more mass market.

All of the art you will see henceforth in this series will be from my illustrator, Mike Groves.

[poopbird.com]. You should immediately click over there and take a gander at his work – it is delightful and amazing. The sketches I’m sharing here are rough and you should do  yourself a favor and look at more of his finished stuff. He is the perfect person to draw zombies or robots for you. Fans of the first book will immediately recognize his style from the cover of Spell/Sword – I was really fortunate that he had time in his hectic schedule to work on the cover for The Riddle Box.

And now – the first sketch.

I can tell you, my heart skipped a beat when I saw this thumbnail. The book’s lived in my head for so long, to see even this sketch of my heroes got me ludicrously pumped. The final design came a long way from this starting point – here would be a good point to thank Mike for his patience with my endless vague emails and texts during the design process.

The Riddle Box — Follow the link to add the new book to your Goodreads!

Sorry, I’ve been super quiet on the blog lately. Kefka isn’t going to defeat himself.

In the never-ending quest to get more copies of my book out there in the world, I’ve enrolled the book in Kindle’s new Matchbook service. This is where when you buy

I still remain committed to the belief that people reading my books is FAR more important than people buying the book, so please don’t be shy. I’m also running another Free Download special of the book in November, if you have friends on the fence about giving the book a shot.

One morning, I heard a story on NPR.

A city on a crossroads, a mix of different cultures and ethnic backgrounds. Musicians found each other in tiny bars, in parks, in hidden nightclubs. And they played. They combined their styles into something new,  a new song, a new kind of music. I remember it sounded like a kind of heartsick jazz, but electric and wandering.  A crossroads of melody, an exploration more than a fusion. It was new, so new — and it only existed in one city in the wide world.

Then the War came. I don’t remember the dates or the enemy or the cause. The musicians fled, or hid. Their religions or creeds or skin colors a danger. And the new music was gone.

War crushed the music under his boot.

Years later, a wanderer came to the city. A woman, a musician’s child. She stumbled into an antique store to buy a mirror, a memento of her journey. Her father came from this city and had filled her young ears with tales of the time before, and the music he had once played. The peddler wrapped the mirror for her and the woman told him about her father. The peddler stopped and laid the mirror down on the counter. He vanished into the back room and returned with a box, a box of old photographs and sheet music.

[Almost none of this was in the broadcast, this is what I saw in my head while I listened.]

“I played with your father,” the peddler said.

And the woman had an idea. She asked the peddler if he knew if any of the old musicians were still in the city. He did. Her idea grew brighter.

Phone calls and letters and emails and the woman’s feet pounding down the dusty streets of the city.

The new music, the melody of the crossroads, the forgotten jazz of the dusty city.

The NPR story played clips of them performing in New York, apparently they’ve been touring for the past several months. But that’s not the point of this story.

The point is why I had to turn my head away from my carpool buddy, so they wouldn’t see me tearing up. This story got me, even though I can’t remember any of the details.

Because the shape of the story is this: the Music won. Just like it always does, like it always will. War and Death and Time and Decay and Rot lost. They fucking lost. The primal powers of the cosmos defeated by a melody. The last magic in the hands of the human race, the best product of our wayward minds and stutter-light souls.

And that’s why it moved me. The NPR story that I barely remember.

I don’t talk about my beliefs. But let me say this. I believe in the Music.

Let all we make be the Music, that turns aside the grip of the universe, that outpaces the weapons of War and Death, and shines brighter through Time and the Dark.

This was a weird story.